Truly grateful to Raffaele Quattrone and WSI magazine for such an extensive interview regarding my artistic practice and more specifically on "A World-Size House", the project I developed as resident artist at the Royal Spanish Academy in Rome (Italy). 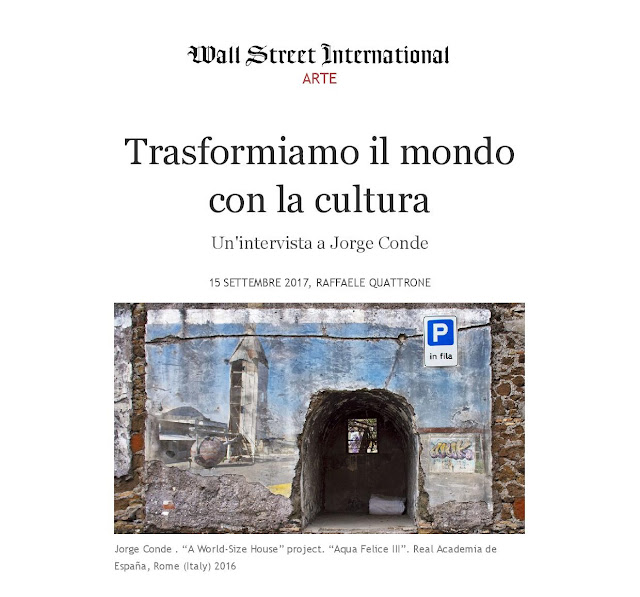 Jorge Conde exhibits “LOVE ME THIS WAY” at the Museum of Modern Art (MAMT) in Tarragona (Spain), as part of the 2017 Contemporary Art Biennial.

“LOVE ME THIS WAY” (2012-17) hybrid installation is included in “The Scarred Transporter Project”, an artistic investigation on technological utopia, our behaviour as consumers and how these two concepts relate to contemporary landscape and their so-called “inevitable” environmental implications. Starting in 2010, this project was produced in close collaboration with the Spanish Ministry of Culture (MECD), and developed with a Visual Arts Grant awarded by the the Autonomous Government of Catalonia (CoNCA).

“LOVE ME THIS WAY” (2012-17) aims to reflect on the notion of technological utopia and highlights some common forms of abuse derived from today’s hyperconsumption society. To do so, Jorge Conde confronts the visual representation of several comsumer’s archetypes along with real motor vehicles and some scale models donated by people who visited previous shows of its mother project “The Scarred Transporter”. In addition to that, the exhibition at the MAMT screens “Love Me This Way”, a video art piece entirely shot at the London Film Museum (UK) in 2015.

Jorge Conde at the University of Alicante Museum ( MUA )_ 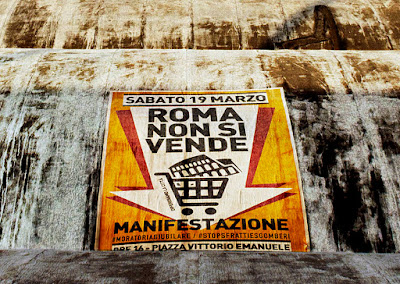 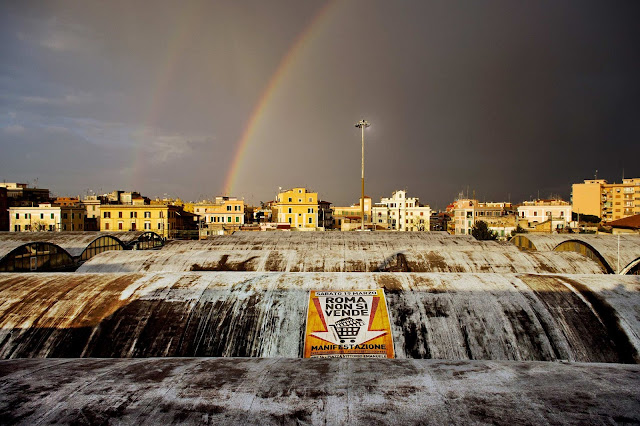 Jorge Conde will be presenting the installation "Roma non si vende" (2016) as part of Encuentros de Arte Contemporáneo (EAC 2017), to be held at the University of Alicante Museum (MUA) starting June 2nd. This installation consists of a series of unseen works created in 2016 as resident artist at the Royal Academy of Spain in Rome (Italy) with the MAEC-AECID Visual Arts Grant awarded by the Spanish Ministries of Foreign Affairs and Culture, along with the Spanish Agency for International Cooperation.

"Roma non si vende" borrows its name from a series of billboards and propaganda flyers that were distributed in Rome a few weeks prior to Saturday March 19th 2016, when a huge demonstration was scheduled in order to protest against several economic and social policies promoted by the Italian government. In addition to that, at that time the city of Rome itself had been suffering from a long-term lack of municipal government which ended up causing an even deeper institutional crisis.

Conceptually, this installation must be understood as part of the project "A World-Size House", an artistic, interdisciplinary investigation on the social, architectural and urban impact derived from the recuperation and transformation of previously abandoned buildings and degraded urban areas in Italy's capital city. To do so, Jorge Conde explores up to seventeen obsolete, disused urban areas or abandoned buildings that in the past three decades have been rescued from oblivion and given a second life as cultural institutions. 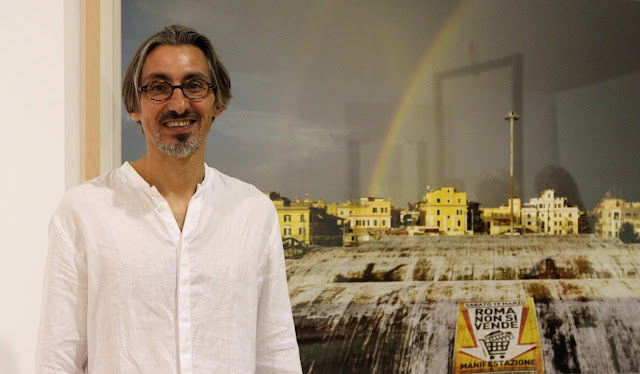 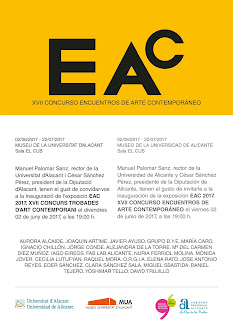 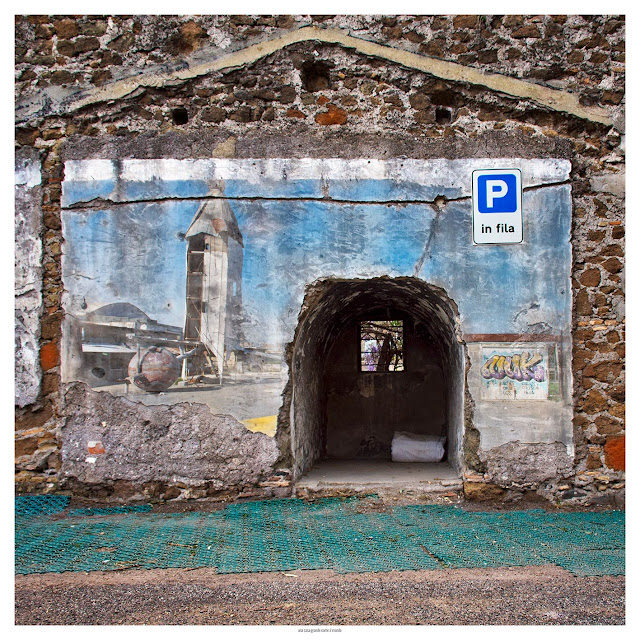 Jorge Conde presents "A World-Size House", a project created as resident artist at the Royal Academy of Spain in Rome (Italy) for the period 2015-16.
"Hecho en Roma" is an exhibition curated by Manuel Blanco and hosted by the San Fernando Royal Academy of Fine Arts in Madrid (Spain). 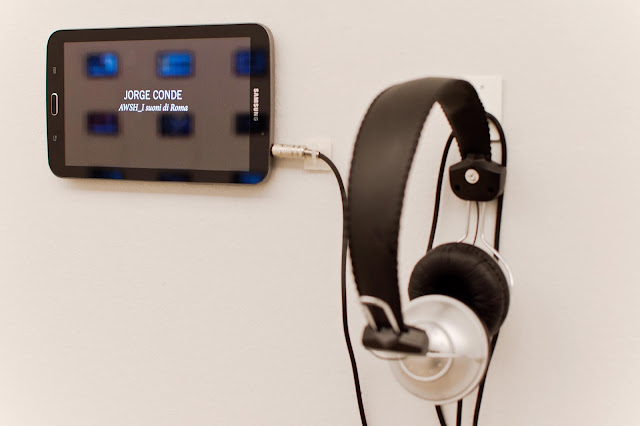 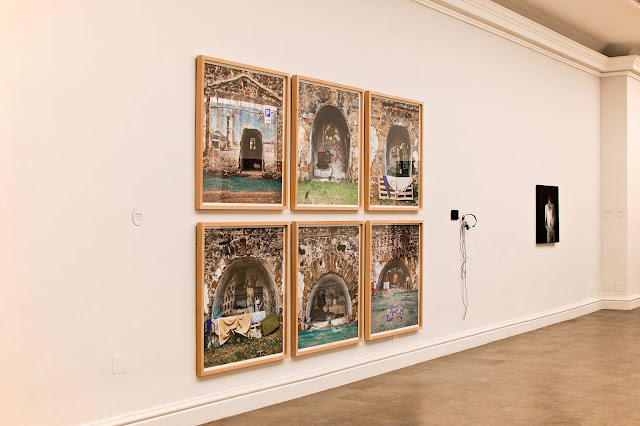 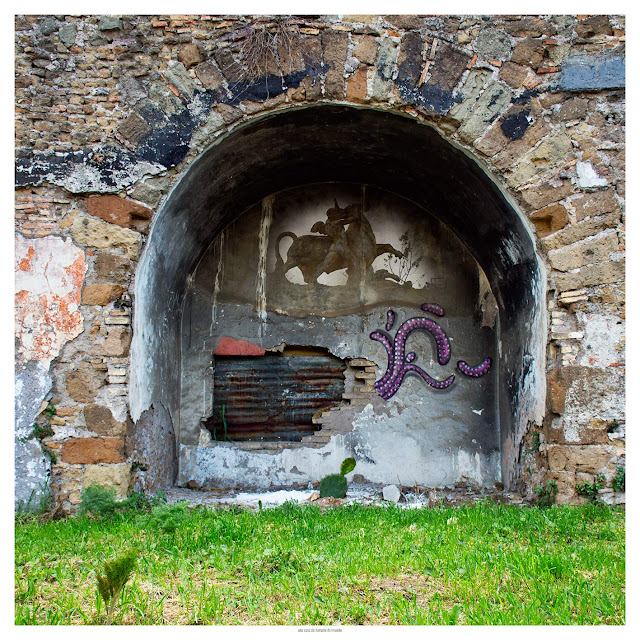 "A World-Size House" is an artistic investigation on the social, architectural and urban impact derived from the recuperation and transformation of abandoned buildings and degraded urban areas in the city of Rome. To do so, Jorge Conde explores up to seventeen obsolete, disused urban areas or abandoned buildings that in the past three decades have been rescued from oblivion and given a second life as cultural institutions.

The transformation of disused spaces is a fairly effective strategy widely-used by the public and private sectors in may countries and diverse territories not only to promote creation, speed up the cultural scene and articulate society, but also to stimulate growth, provide a gain of prestige, and reactivate declining urban areas. Inserted within a more ambitious renovatio urbis process, this strategy undoubtedly establishes new paradigms and introduces a clear notion of cultural utopia.

Internationally, this strategy has also produced some negative effects such as the application of flawed, inefficient cultural policies, real estate speculation, mutation of urban identity, social division, gentrification, and ghettoization. In Rome’s case specifically, it frequently happens as an exercise of industrial archaeology, a response to a conflict of interest or a way of dealing with a social emergency.

In the city of Rome there are plenty of such examples of urban rebirth, newly-born institutions of different types, ranging from public museums, art production centers and privately-run foundations, to occupied, self-managed, barely legal cultural centers or even historical sites, along with many other hybrid initiatives. All of these projects have to some extent modified or recuperated the memory of several of the most distinctive Roman “quarteri”. 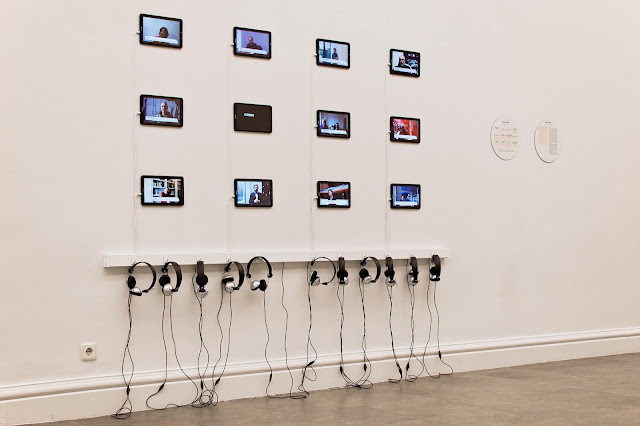 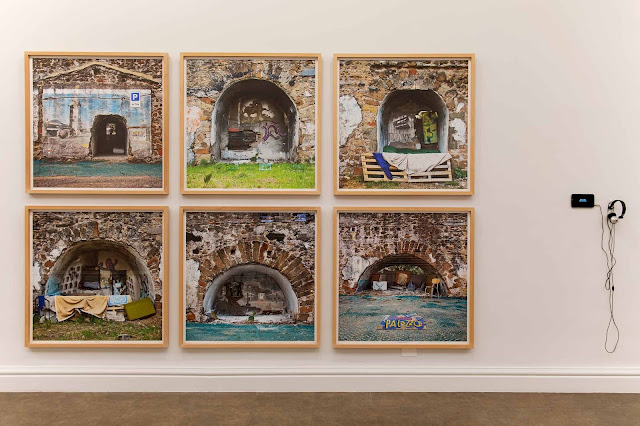 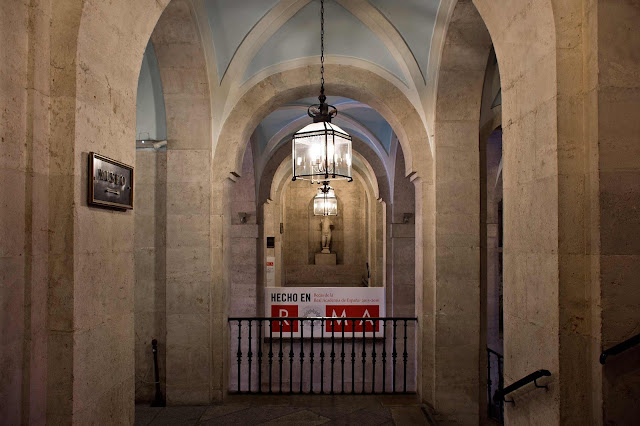 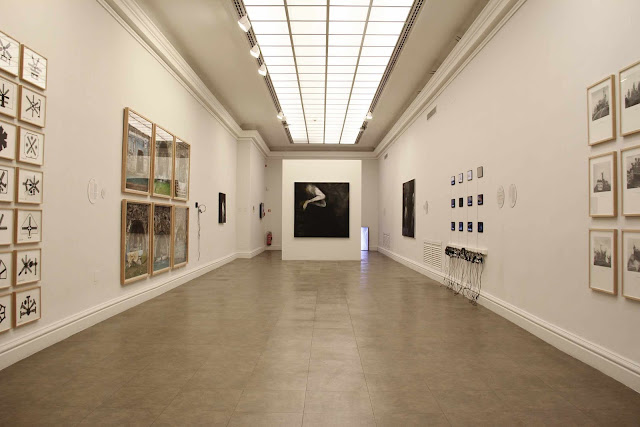 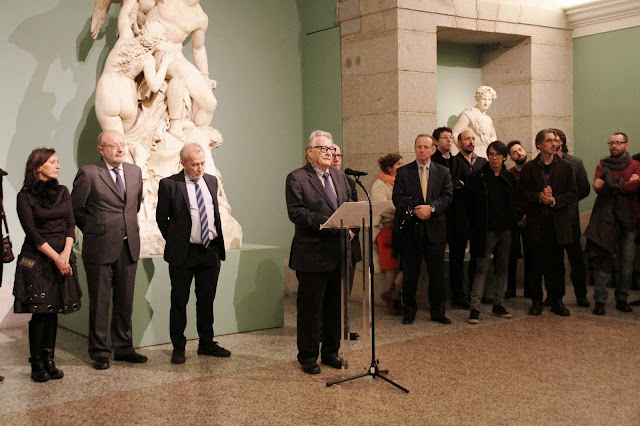 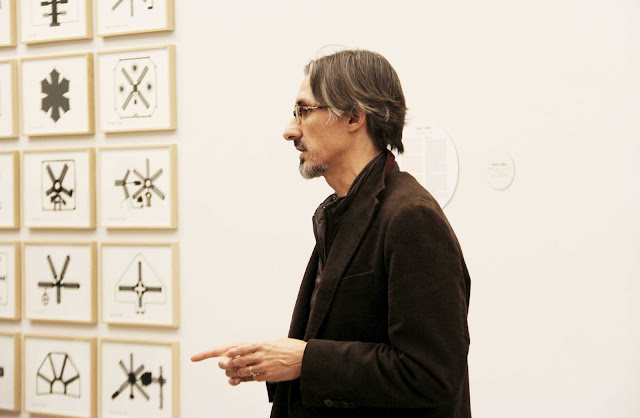 "MADE IN ROME", "San Fernando" Royal Academy of Fine Arts in Madrid (Spain)_

Next Friday February 24 at 7pm my fellow artists-in-residence and myself will be opening "Hecho en Roma", the exhibition showcasing the projects developed last year at the Royal Academy of Spain in Rome. Everybody is welcome! 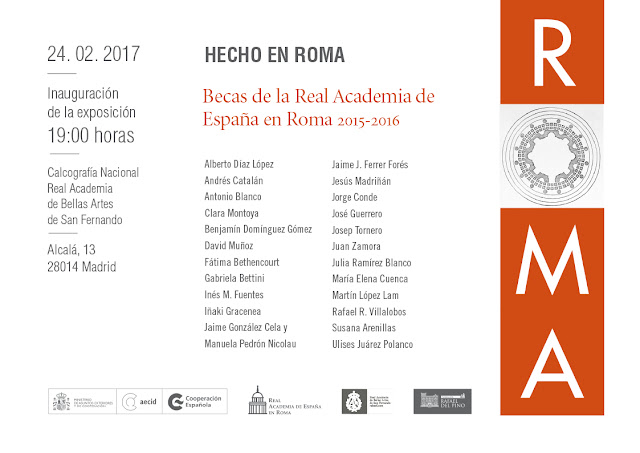 Video presentation of Jorge Conde's "A World-Size House" project (2016), prior to its upcoming exhibition at the San Fernando Royal Academy of Fine Arts in Madrid (Spain). 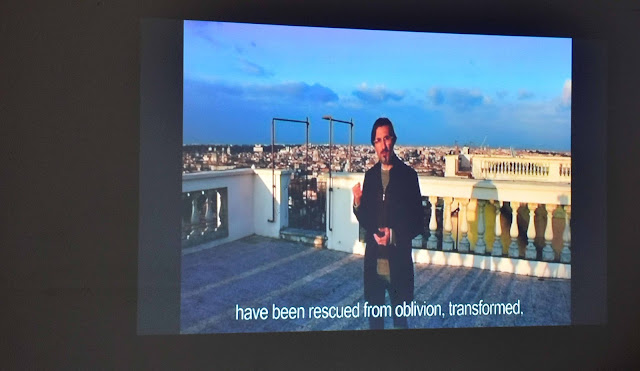 "Street Journalists", a new work to be included in the "WFoF" series_


This series of paintings and manually-altered hybrid photographs ironically reflect on some common obsessions widely spread in contemporary Western societies and the excesses of today’s quest for instant satisfaction. Generally speaking, they are defence mechanisms –often times extremely sophisticated- used by individuals either to adjust themselves to the role models communicated by the media, or else to get some relief from competition and peer pressure. 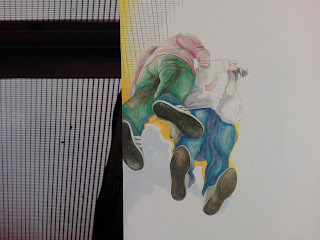 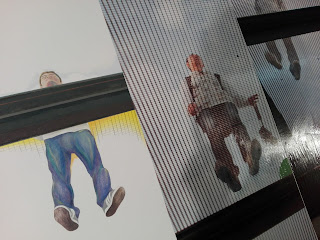 The original photographs were mostly taken in London's South Bank district, in the vicinity of the , in November of 2009. Hundreds of photos and clips were taken/recorded during the said session, images of people passing by along with architectural elements and the urban setting. Later on, the images were carefully selected, fragmented, and used in order to compose the final works. Hybridization of pictorial and photographic techniques helped the artist to explore the series’ main theme from a more conceptual, speculative perspective.